World Congress of Families released a letter Wednesday sent to pro-family leader, Prime Minister Viktor Orban, congratulating him on the election victory of his Fidesz Party in Hungary.

On behalf of the World Congress of Families, and its parent group The International Organization for the Family, we heartily congratulate you for the remarkable political victory achieved by Fidesz this past Sunday.

This triumph by your colleagues and you is not only a victory for democracy and true liberty in your venerable and important land. It also represents a victory for friends of the Natural Family around the globe. Your Party’s commitments to demographic renewal, the promotion of natural marriage, and the protection of children from sexual radicals are exemplary. Not only in goals but also in specifics, the thoughtful and comprehensive Fidesz family policy program represents a model for emulation in other lands.

At another level, your victory is also a beam of hope for Western Christian Civilization. Many nations in Europe have grown weary and seek little more than a childless decline and ultimate disappearance. In contrast, you have mobilized the Hungarian people toward rebuilding a family-centered, religiously grounded nation, as a contribution to the renewal of all Europe and the recovery of an authentic Christendom. As you have remarked, “our goal… is to have as many children in Hungary as possible; because if there are children, there is a future.” This is a great, forward-looking project of enormous importance.

We remain proud to have partnered with your government and you in convening The World Congress of Families XI in Budapest last May. And we remain delighted by your opening address where you declared the Family to be “at the center of the Hungarian government’s vision of the future.”  We wish you Godspeed as you pursue this vision and look forward to continued close cooperation.

P.S. We are attaching this letter to this email and have also sent by regular mail.  We will make this letter public today, to show our heartfelt support for what you are doing in Hungary. 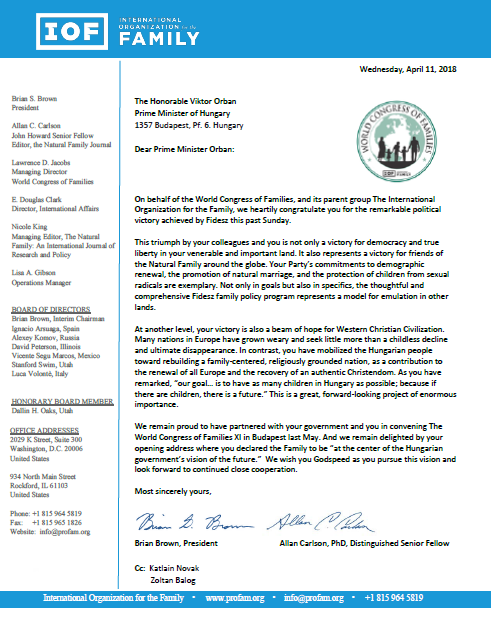