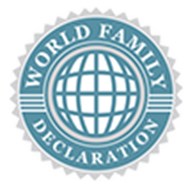 “We the people of many lands and cultures reaffirm the truth enshrined in the Universal Declaration of Human Rights, and echoed in international treaties and many of our national constitutions,that “The family is the natural and fundamental group unit of society and is entitled to protection by society and the State.” Hence the family exists prior to the state and possesses inherent dignity and rights which states are morally bound to respect and protect.

“We declare that the family, a universal community based on the marital union of a man and a woman, is the bedrock of society, the strength of our nations, and the hope of humanity. As the ultimate foundation of every civilization known to history, the family is the proven bulwark of liberty and the key to development, prosperity, and peace.

“The family is also the fountain and cradle of new life, the natural refuge for children, and the first and foremost school to teach the values necessary for the well-being of children and society. The family truly is our link to the past and bridge to the future.” Read more

The World Family Declaration, an initiative of the World Congress of Families and endorsed by pro-family organizations across the globe, is now online at www.worldfamilydeclaration.org and available for electronic signature.

“Never before has there been a universal banner uniting all peoples to rally in protection of the natural family, and never has it needed protection as urgently as now,” stated WCF Director of UN Affairs Doug Clark. “We have created the World Family Declaration to address that need and be that banner.”

Opening with the words “We the people of many lands and cultures,” the Declaration is grounded in Article 16(3) of the Universal Declaration of Human Rights, which states, “The family is the natural and fundamental group unit of society and is entitled to protection by society and the State.”

That language is echoed in 111 national constitutions, many of which repeat it verbatim while others describe the family in such varied terms as the “natural and moral foundation of the human community” (Niger) or “foundation of the nation” (Philippines), or as society’s “cornerstone” (Greece), “fundamental pillar” (Afghanistan), “basic institution” (Colombia), or “fundamental nucleus” (Chile).

Speaking at the recent launch of the World Family Declaration at the ONE UN New York, WCF International Secretary Allan Carlson observed, “I applaud those nations which have placed language about protection of the natural family in their constitutions. Endnote #3 of this Declaration provides a solid review of these provisions. Even if and when the actions of a government might stray from this principle, such a constitutional provision stands both as a rebuke and a summons for a return to good order.”

“It is my hope,” continued Carlson, “that the World Family Declaration will play a significant role in rallying international attention again to the most important unit of society, the natural family.”

Clark added, “Today we unfurl a banner to remind the world of the foundational and irreplaceable role of the family. In the words of the Declaration, ‘We urge citizens, leaders, and people of influence everywhere to place as their highest priority the protection and strengthening of the family.'”