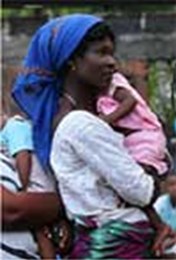 In Praise of Mothers

“Mighty is the power of mothers!” wrote George Eliot. “Mothers are the most powerful influence for good on the earth today,” says Shelly Locke.

We join in thanking the millions of mothers around the world for their love and selfless service, and we urge governments and civil society to answer the call in the Universal Declaration of Human Rights that “Motherhood and childhood are entitled to special care and assistance.”

We would add that mothers are also entitled to our deepest gratitude and highest praise—such as that contained in the following tributes to mothers.

“To be a mother is a great treasure. Mothers, in their unconditional and sacrificial love for their children, are the antidote to individualism; they are the greatest enemies against war.” —Pope Francis

“The noblest calling in the world is motherhood. True motherhood is the most beautiful of all arts, the greatest of all professions.” —David O. McKay

“Motherhood is more than childbearing; it is a life choice entailing sacrifice, respect for life, and commitment to passing on those human and religious values which are essential for a healthy society.” —Pope Francis

“Motherhood is both a great responsibility and one of the most unique, rewarding, and pleasurable experiences life has to offer.”—Ronald Reagan, Mother’s Day Proclamation, 1984

“I looked on child-rearing not only as a work of love and duty but as a profession that was fully as interesting and challenging as any honorable profession in the world and one that demanded the best that I could bring.”—Rose Kennedy

“The mother’s image is the first that stamps itself on the unwritten page of the young child’s mind. It is her caress that first awakens a sense of security; her kiss the first realization of affection; her sympathy and tenderness the first assurance that there is love in the world.” —David O. McKay

“Maternal love is the first tangible bond any human being knows. It is a tie at once physical, emotional, psychological, and mystical. With all of the words that have been written about motherhood, all of the poems of tribute and gratitude that have been penned through the ages, all of the portraits of a mother and child that have been painted down the centuries, none has come close to expressing in full the thankfulness and joy owing to mothers.” —Ronald Reagan, Mother’s Day Proclamation, 1988

“The mother’s heart is the child’s schoolroom.” —Henry Ward Beecher

“To our mothers we owe our highest esteem, for it is from their gift of life that the flow of events begins that shapes our destiny. A mother’s love, nurturing, and beliefs are among the strongest influences molding the development and character of our youngsters. As Henry Ward Beecher wrote, ‘What a mother sings to the cradle goes all the way down to the coffin.’”—Ronald Reagan,Mother’s Day Proclamation, 1983

“The goodness of home is not dependent on wealth, or spaciousness, or beauty, or luxury. Everything depends on the mother.” —George W.E. Russell

“We know and can never forget all that our mothers have given us every day, year by year, in love and courage, in toil and sacrifice, in prayer and example, in faith and forgiveness. There is no love like a mother’s—she who carries the child that God knits in the womb, she who nourishes and guides, she who teaches and inspires, she who gives of her heart and soul and self for the good and the happiness of her children and her family.”—Ronald Reagan,Mother’s Day Proclamation, 1987

“A mother is the truest friend we have, when trials, heavy and sudden, fall upon us; when adversity takes the place of prosperity; when friends who rejoice with us in our sunshine, desert us when troubles thicken around us, still will she cling to us, and endeavor by her kind precepts and counsels to dissipate the clouds of darkness, and cause peace to return to our hearts.” —Washington Irving

“We are grateful to mothers for their willingness to give of themselves for their children’s well-being, for their wholehearted belief in their offspring, for their love, for being wellsprings of hope, and for all the support they lend to us throughout life.” —Ronald Reagan, Mother’s Day Proclamation, 1984

“My Mother was the most beautiful woman I ever saw. All I am I owe to my mother. I attribute all my success in life to the moral, intellectual and physical education I received from her.” —George Washington

“I shall never forget my mother, for it was she who planted and nurtured the first seeds of good within me.”—Immanuel Kant

“All that I am or ever hope to be, I owe to my angel Mother.” —Abraham Lincoln

“My mother was the making of me. She was so true, so sure of me; and I felt I had something to live for, someone I must not disappoint.”—Thomas Alva Edison

“In all my efforts to learn to read, my mother shared fully my ambition and sympathized with me and aided me in every way she could. If I have done anything in life worth attention, I feel sure that I inherited the disposition from my mother.”—Booker T. Washington

“Mighty is the force of motherhood!” —George Eliot

“Mothers are the most powerful influence for good on the earth today. Within their hands lies the very future of the world! Mothers of the world deserve our greatest respect, our protection, and our care.” —Shelly Locke, Power of Mothers

“As mothers help give their families a stability rooted in love, steadfastness, devotion, and morality, they strengthen our communities and our Nation at the same time.”—Ronald Reagan, Mother’s Day Proclamation, 1987

“Families are truly the foundation of society, and mothers the vital foundation of the life of the family. Their influence on the training and education of our youth is so deep and pervasive that it is impossible to measure.”—Ronald Reagan, Mother’s Day Proclamation, 1985

“While history books sing the victories of valiant emperors and warriors… all of civilization and certainly the Church owes an unpayable debt of gratitude to the less chronicled or even unknown contributions of women that have shaped civilizations, like the silent but constant flow of deep waters that shape rivers.” —Archbishop BernarditoAuza, Feminine Genius and a Better World

“When the real history of mankind is fully disclosed, will it feature the echoes of gunfire or the shaping sound of lullabies? The great armistices made by military men or the peacemaking of women in homes and in neighborhoods? Will what happened in cradles and kitchens prove to be more controlling than what happened in congresses?” —Elder Neal A. Maxwell

“Mothers play a critical role in the family, which is a powerful force for social cohesion and integration. The mother-child relationship is vital for the healthy development of children…. We face multiple challenges in our changing world, but one factor remains constant: the timeless importance of mothers and their invaluable contribution to raising the next generation.” —UN Secretary-General Ban Ki-Moon, Message on the International Day of Families, 2009

“Humanity owes its survival to the choice women make not just to welcome children, but raise them to be virtuous and authentically human: mothers give children the trust and security they need to develop their personal identity and positive social bonds. Could there be a greater bond among humans than that between the mother and child? Our future is already mirrored in how we, as individuals and as a society, support mothers to raise strong and healthy families.” —Archbishop Bernardito Auza, Unique Gifts of Women